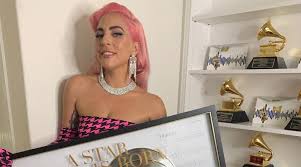 Lady Gaga celebrated the one-year anniversary of A Star Is Born, and her Oscar-winning song Shallow going platinum six times over on Saturday.
The 33 year old singer celebrated her hit album by showcasing the six-time platinum plaque, signifying that Shallow has sold 6 million albums, and new pink hair.
She also showed off a pink and black dress and new makeup from Haus Labs in another Instagram photo.
'A year ago, A Star was Born, and here we are 6 times pink platinum,' Gaga said in the caption of her photo.
The photo showed Gaga holding up a sizable plaque that shows Shallow has sold six million albums worldwide, while seven of her nine Grammy Awards are seen.
She also took to Instagram with another image that showed off her unique pink and black dress and a makeup by Gaga's beauty brand Haus Labs.
'@sarahtannomakeup used Glam Attack in 'Rose B***h' & 'Aphrodite' all over the lid and 'Chained Ballerina' for an easy smoky eye,' Gaga began.
'Defined the lash line with Eye-LIE-Ner in 'Punk'! �� are RIP Lip Liner in 'Ride' and Le Riot Lip Gloss in 'Entranced' ✨ everything is available on HausLabs.com and @amazon!' she concluded.
Gaga first teased her Haus Laboratories makeup products on social media this past summer, though the products weren't available for purchase in mid-September.
One year ago on Saturday, A Star is Born was released in theaters, which would go on to be one of 2018's surprise hits.
The drama remake, with Gaga starring and performing alongside Bradley Cooper, opened with $42.9 million.
The film would go on to earn $215.2 million domestic and $434.8 million worldwide, from just a $36 million budget.
Gaga was nominated for an Oscar for her performance as Ally, and she won an Oscar with Mark Ronson for Best Original Song with Shallow.
Gaga was also reportedly offered a role in Warner Bros.' upcoming reboot of Little Shop of Horrors but there is no indication if she plans on taking the role.
Gaga is also working on her currently-untitled sixth studio album with producer Bloodpop though it is not know when it may be released.