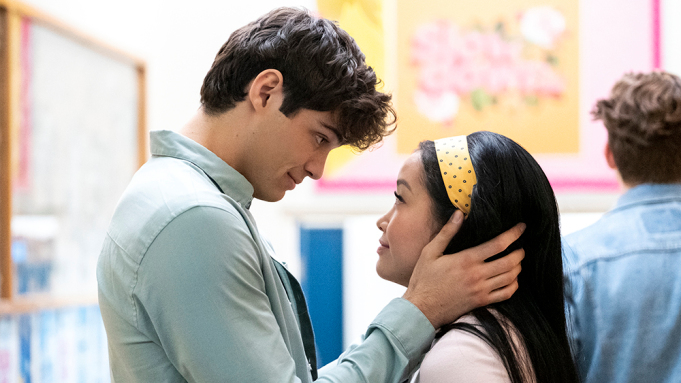 Sad news for fans of Netflix’s “The Kissing Booth” and “To All the Boys” franchises – both will be coming to a close this year.
Along with Netflix’s announcement of its 2021 movie slate, the streaming platform confirmed that each franchise’s third film — “The Kissing Booth 3” and “To All the Boys: Always and Forever, Lara Jean” — will be the last.
Both of the rom-com trilogies have performed extremely well on the platform. Netflix chief content officer Ted Sarandos called the original “Kissing Booth” film, which released in 2018, one of the most-watched movies in the country, with one in three viewers re-watching the film. “Kissing Booth 2,” which premiered on July 24, 2020, was the third-most viewed release on Netflix that weekend, and became one of its most popular titles of the year. The first “To All the Boys” movie, “To All the Boys I’ve Loved Before,” was also a breakout success, as the platform called it one of the “most viewed original films ever with strong repeat viewing.”
Starring Joey King, Joel Courtney and Jacob Elordi, “The Kissing Booth” franchise follows best friends Elle Evans (King) and Lee Flynn (Courtney), and the drama that ensues when Elle falls for Lee’s brother, Noah (Elordi). The second film shows Elle and Noah’s relationship begin to falter as they navigate long distance with Noah attending Harvard, which isn’t helped when Elle meets a new love interest (played by Taylor Zakhar Perez). In “Kissing Booth 3,” Elle will have to make a life-changing decision: Will she attend Harvard and be with Noah, or join Lee at UC Berkeley, their dream school?
“To All the Boys” centers on Lara Jean Covey (Lana Condor), whose secret letters to her crushes accidentally get sent to them. One of said crushes is lacrosse jock Peter Kavinsky, played by Noah Centineo, and the two think up a faux romance plan that transforms into real feelings. The second film, “To All the Boys: P.S. I Still Love You,” follows Lara Jean and Peter’s budding romance, but when one of her previous crushes — John Ambrose McClaren (Jordan Fisher) — comes back into the picture, Lara Jean must decide between the two. The third film will see Lara Jean embark on two life-changing trips that will force her to reimagine what life after graduation — with her friends, family and Peter — looks like.
Though neither of the final films have specific release dates yet, they are set to premiere in 2021.